Now that museums and galleries have mostly re-opened, we can once again flock to art exhibitions to show our support and enjoy seeing our favourite pieces of art in a new light.

To help you choose where to go first, we’ve listed our top five exhibitions in London, running throughout autumn. From modern to contemporary, classical to pop, the capital has an exhibition to satisfy all tastes.

London is full of statues and memorials commemorating the British Empire. However, a new, very different monument has emerged in the Turbine Hall of Tate Modern, in the form of 2019’s Hyundai Commission, Kara Walker’s momentous Fons Americanus fountain. Walker is known for creating work that touches on the themes of identity, race, sexuality and violence. Her fountain does just that, standing as a stark critique of the British Empire. She portrays a part of British history, which has been vastly hidden, and asks us to face the ghosts that have been suppressed therein.

More specifically, Walker questions how we remember, and to some extent, perpetuate history through public memorials as well as the narratives of power we are continuously fed. Presenting her fountain as a “gift … to the heart of an Empire that redirected the fates of the world” (Tate, ‘Kara Walker’s Fons Americanus’), she allegorises those narratives and asks us to actively confront our past in order to reshape our future. Personally, we couldn’t think of a more relevant work for our times.

See it at Tate Modern before November 8th, 2020 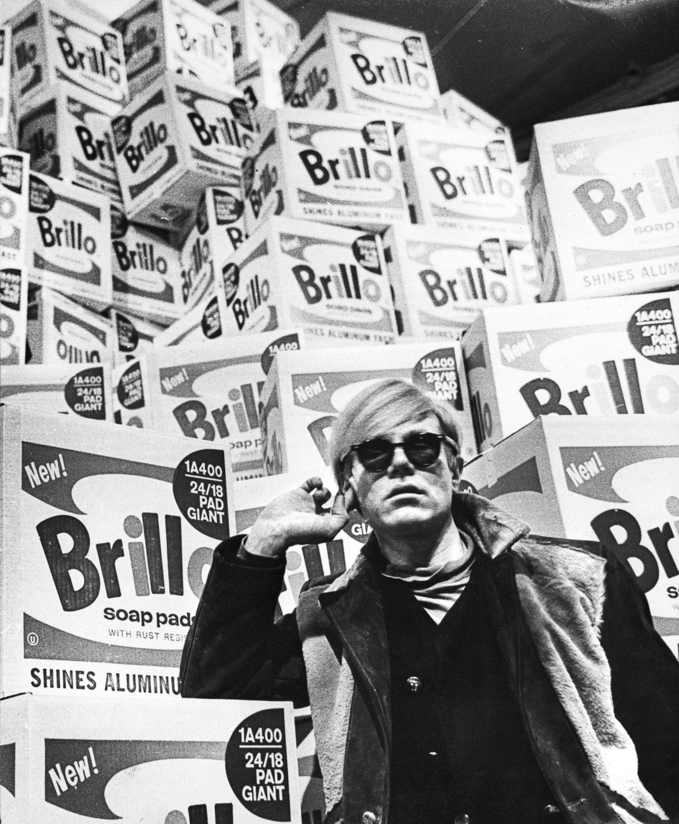 Andy Warhol in Moderna Museet, Stockholm, before the opening of his retrospective exhibition, with his Brillo boxes in the background, 1968. Photo courtesy of Wikimedia Commons.

If you’re looking for a show that features some of Warhol’s most iconic, signature pieces, then this one’s for you. However, rather than just present Warhol’s key pop works, which have been massively commercialised, this exhibition shows us another, more hidden side to Warhol, including 25 works from his ‘Ladies and Gentlemen’ series which haven’t been shown for over 30 years.

Starting with his family’s immigration card from Slovakia to the United States and early drawings of handsome men, the Tate retrospective helps us see Warhol as someone who reinvented the meaning of art as well as his own identity in a time of rapid industrial, social and economic change. In short, rather than focusing on the myth, it allows us to get in touch with Warhol’s humanity.

Turner-prize-winning artist and Oscar-winning filmmaker Steve McQueen’s exhibition is a real, unapologetic celebration of multicultural London. Displayed in Tate Britain’s Duveen Galleries, the show takes us on a trip down memory lane of how it was to be a seven-year-old at school at the pivotal crossroads between childhood and adolescence. We challenge anyone to not find each of the children smiling back at us through the photographs, with their crooked ties and missing teeth, endearing.

More importantly, however, McQueen’s exhibition is a powerful, very relevant portrayal of London now and London in the future.

“There’s an urgency to reflect on who we are and our future […] to have a visual reflection on the people who make this city work. I think it’s important and in some ways urgent” – Steve McQueen (Tate, ‘Steve Mcqueen Year 3’).

It is left up to us to continue preserving as well as embracing inclusivity and diversity throughout the capital.

If you’re into stories of love, passion and punishment, then you should definitely head to the National Gallery for their exhibition on the famous Renaissance painter, Titian. The show revolves around Titian’s poesie series, which was commissioned by Prince Philip of Spain in 1551. These six impressive paintings depict scenes from Greek myth, predominantly based on Ovid’s ‘Metamorphoses’.

Walking amongst these giant gods and goddesses, who look extremely human and relatable, is like being wrapped up in an enticing drama, where each emotion is explored in astonishing detail. This is a rare opportunity to admire some of the most enchanting paintings in art history as well as Titian’s incredible, undeniable talent.

See it at the National Gallery before January 17th, 2021