For The Louvre Series, Daniel Arango has spent time directly in the space of the museum selecting objects from its collections and drawing them from life on to his laptop using AutoCAD.

In the summer of 2016, Arango wandered around the Louvre Museum for six weeks selecting fifty objects from its collection to draw. He found hidden corners almost every day. Often, he would return to those rooms, empty of tourists, and draw the objects in different lighting. After he drew all fifty objects, he set off on a yearlong journey across the world and worked on the digital drawings alongside his adventures. Some of the cities he visited were documented directly in the paintings, along with his Instagram photos and text.

From Paris, he travelled through Europe, followed by India, Indonesia, the Maldives, Malaysia, and finally, New Zealand, where he completed the Louvre series. In Auckland, he printed the digital drawings onto canvas. Following that, for two months he hitched-hiked, trekked and camped across both the North and South Islands with his paintings. Arango painted outdoors and was influenced by the amazing landscape he was surrounded by and its dramatic colours. 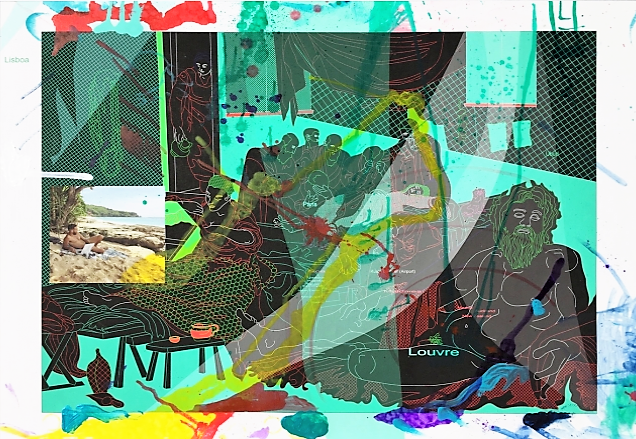 Daniel Arango (1982) is a Colombian-born, American-raised artist, who roams the world making art and looking for inspiration. Arango's family fled Colombia’s civil war when he was three, moving to Miami. He received a Bachelor of Fine Arts degree in Interior Design from the School of Visual Arts in New York City and a Master of Fine Arts degree in Painting from Rhode Island School of Design. Training in both interior design and painting greatly influenced his art practice.

Previously based in New York City, he has been travelling around the globe with his nomadic studio since 2011. For his Hawaiian Series, he lived in the Maui jungle for four months, harvesting plants and absorbing the exotic environment. For Arango’s most recent series, he composed intricately layered digital drawings, exploring the relationship between his environment and history as well as contemporary culture. He gets inspiration from art objects, antiquities and some of the world’s great cultural institutions, namely The Metropolitan Museum of Art and the Louvre.

Arango creates images of depth and real beauty through a detailed process of digitally manipulating life drawings, printing them and applying paint to them, often painstakingly so that there is no trace of the drawing left. The impact of architectonics is integral to the finished work. He creates tight structures within his works to act as a point of departure from which to explore a looser rendering of line and form in the composition, and metaphorically, to liberate the self within a rigid homogenizing society.