A meditative space-time journey. This is how I would sum-up Laura Santamaria’s studio visit: an experience full of energy and emotional involvement, thanks both to the compelling conversation with the artist and her intense work.

Art, between space and time

A meditative space-time journey. This is how I would sum-up Laura Santamaria’s studio visit: an experience full of energy and emotional involvement, thanks both to the compelling conversation with the artist and her intense work.

The high level of vibrancy has been balanced by a prominent meditative side, coming both from Laura’s words and work, but also from the studio itself, shared with a holistic centre.

Even if Laura has a strong international profile, featuring exhibitions at institutions as Whitechapel Gallery in London, Kunstverein Neukölln in Berlin, Museo de Arte Contemporáneo de la Fundación Gas Natural Fenosa and at Herrick Gallery in London (thanks to her collaboration with London Trade Art), her studio is located in Como, town from which the artist originally came from.

When I arrived at the studio, its walls were completely blank. Laura improvised an engaging set-up, creating an intertemporal representation of her artist’s path by showing her work and talking simultaneously about it, providing anecdotes and details. Her personal visual storytelling followed an inverse order: starting from the most recent artworks, showed at Daniele Agostini Gallery in Lugano in May-July 2019, she then retraced the work of the previous ten years backwards.

Her path as an artist is made of heterogeneous elements, mainly material and primordial, able to create a dialogue in the artwork itself which continuously varies and evolves, being enriched by additional factors and a high level of consciousness. 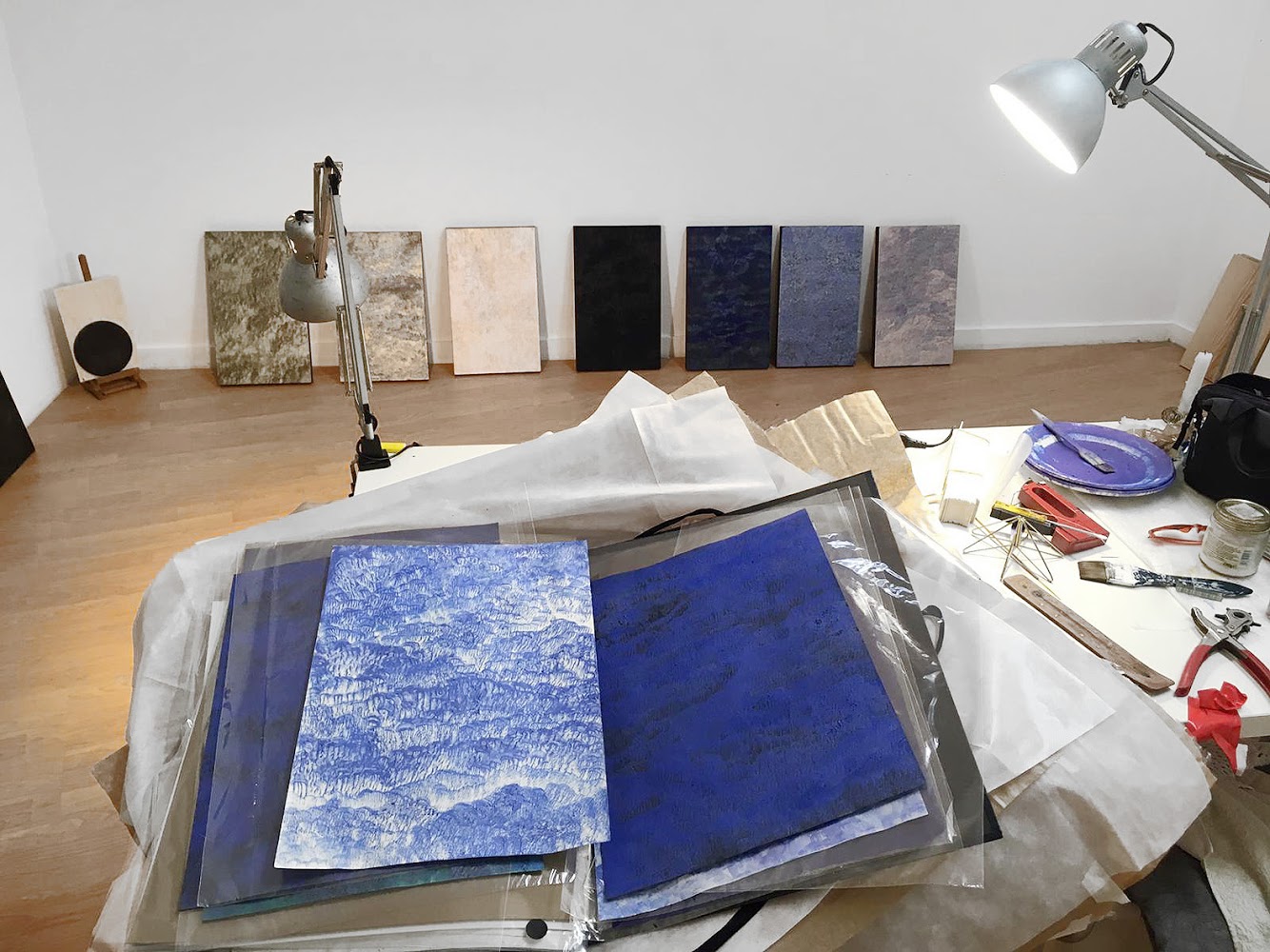 Colour, between material and soul

The most significant element in the last stage of Laura’s production is represented by the colour, empowered by a strong effort in representing its connection with light interactions. Her work allows to create an emotional encounter between the material and spiritual dimensions: the colour’s choice, in fact, is never accidental, being instead driven by the artist’s soul.

The artist acquires this consciousness after years of individual deepening and research, clearly reflected by her studio, which is full of papers and books. Even if her most recent points for reflection come from “The Rediscovery of Colour” by H. O. Proskauer, and “Becoming Invisible” by Ian Whittlesea, the main theory which drives Laura’s work is that of the essence of colours by Rudolf Steiner, according to whom colours represent a reflection of souls, becoming a light vibration that resonates with connected spirits.

Indigo is the colour chosen by the artist for her last series, as it represents the colour to which she currently feels spiritually attracted, sometimes with red or light blue fluctuations, as represented by the artworks.

The colour is created by Laura herself, as an alchemist, by using pure pigments, tidily placed in a dedicated section of her studio: the colour white comes from mother-of-pearl, black from graphite, giving birth to artworks able to simultaneously represent soul and matter in their most primordial essence.

Her interest and investigation on colour origin from her education with artist Davide Benati at Brera Academy of Fine Art, which ended up in personal research and obsession which bring the artist to develop a chromatic sensibility allowing to create colours vibrating with the visual perception.

The peak of her research on colours and pigments has been achieved in the context of her residency at Museo De Arte Contemporaneo in Coruna, Spain, where the artist’s work reached a chromatic oscillation as intense as those of the planets, to which the artworks produced were directly connected. The pieces, partially exhibited in What Goes Around Comes to Art exhibition organized by London Trade Art at Herrick Gallery, represent a milestone in the artist’s work, being them able to fully represent her long research effort, visually showing the consciousness related to the colour personally developed by the artist. 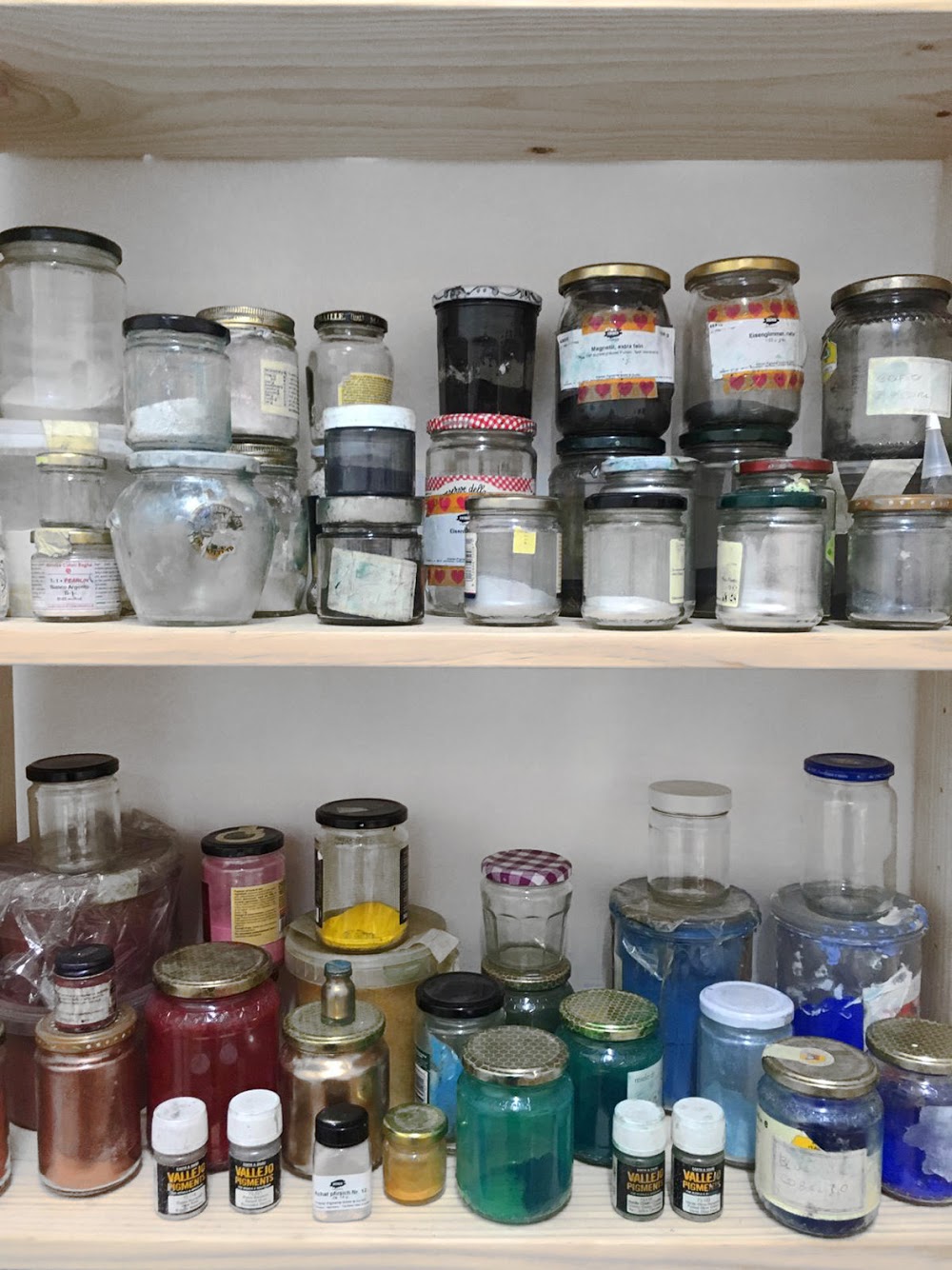 Flame, between landscapes and sublime

Laura’s previous work was based on black-white / light-shadow bonds, thanks to the use of flame, from which the Blacksmokes series originates. The series, made of around thirty pieces, includes also Hypnero, exhibited in 2015 in the London Open exhibition at Whitechapel Gallery. The choice to use flames comes from the artist’s attraction for the Sun, which generates an “emotional pulsation”. This is related to another Rudolf Steiner’s theory, according to whom the spark is life, while the human emotional participation to the landscape is fire. In this context, Laura uses the flame in order to paint her emotional connection to the landscape, instead of the landscape itself. This approach shows an alignment with romantic painters in experiencing the sublime, making it a vivid perception and not only an art history topic. In fact, according to Laura, the sublime is the “turmoil, dizziness, emotional emphasis experienced by someone fully involved in the landscape”. In this sense, the artwork itself describes her emotional commitment, as the act of drawing through flames happens without looking at the process, but exclusively following the artist’s emotion. Therefore, the artwork represents the result of a complex meditative process which reminds ancient primordial rituals.

Pigments, flames, planets, spirituality, sublime, rituals… Laura Santamaria’s studio visit has been a visual and emotional journey in her deep artist’s path, which offers a fascinating gaze into her inner reality, brilliantly represented by intense artworks able to deeply touch both the heart and the eyes.