AN INVESTIGATION INTO TODAY AND TOMORROW’S PERCEPTION: IN THE STUDIO WITH IRNEM

A compelling conversation with Francesco Irnem

The image under investigation

Francesco Irnem (Rome, 1981) puts the concept of image under a deep, almost surgical, investigation. The artist captures, dissects, analyses, destructures and then recomposes the image itself, on the basis of a process altering the perception of its form, while it would certainly be impossible to impact on its substance.

Even if it is complicated to understand what practically an image is in its inner essence, the artist makes us understand that it is possible to interpret it exclusively on the basis of our perception and, above all, of the tools people use in order to observe it.

Historical eras are characterized by the memorial association to the images related to them. The beginning of ‘900 has been described through black and white images of that period, whose smell is part of our memory, while the end of the same Century saw the wide diffusion of the analogic pictures made through darkrooms.

The tool capturing the image represents at the same time its filter, dynamics becoming even invasive when the digital arrived. Francesco Irnem last decade’s work and, in particular, his most recent production, should be placed in this context. 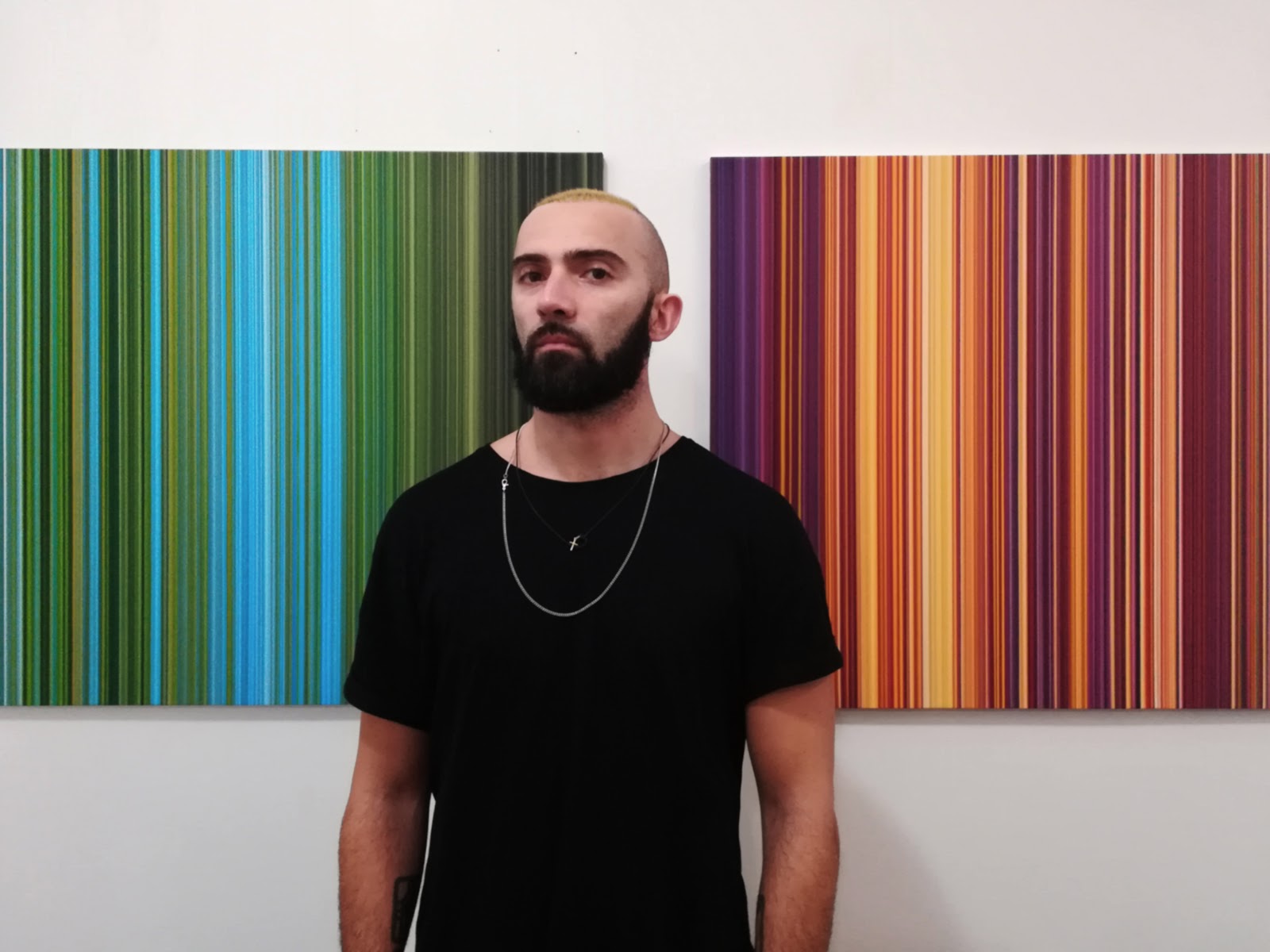 How does technology observe an image?

The artist investigates on the consequences of the impact of the new technologies on the contemporary individual, not only under a perceptual point of view, but also rising his research to an anthropological level.

The last series of works produced by the artist, called Linear Transformation and presented in October 2019 at Macro Museum in Rome in the context of the Isola Croma project, represents the ultimate result of his deep investigation. In these works the image has been translated into an aggregation of lines which gives birth to a painting. Nevertheless, the artwork is the result of not only the use of paint, but of a mix of heterogeneous media: the starting point is a picture of a landscape, shot by the artist himself, who, through technology and video tools, puts the image totally out-of-focus obtaining coloured lines, depicted on canvas thanks to an accurate pictorial work. The image is someway synthesized, becoming a wave transmitting an information, representing in the artist’s view “a way to conceive the reality close to the perception of an artificial intelligence. The pictorial gesture becomes a way to register, observe and reflect on this passage. It is like watching an image from the window of a runaway train”. 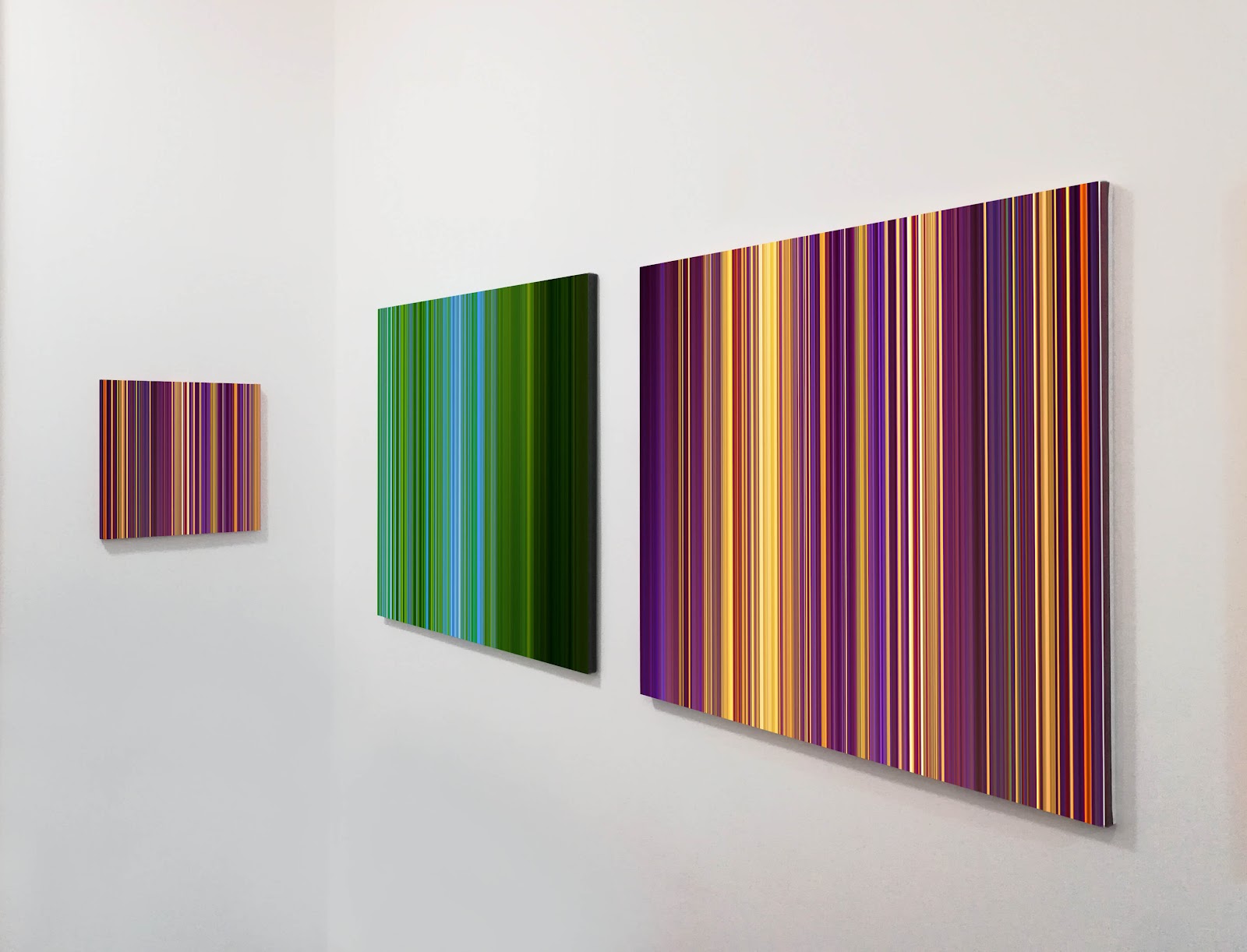 The artworks are the result of a deep research, which includes references to electronics, especially to the anomalous phenomenons, as, in jargon, the “glitches” or the “spikes”, and to physics, which describes these kinds of dynamics as singularities through which the image loses its physiology, becoming a spring extended in the infinite space. The result, according to the artist, is “the perception of a vibration, originating from the pure colour, which moves then directly to the observer’s emotion”.

Irnem’s previous work has been preparatory to the series Linear Transformation; in particular, a relevant role has been played by the body of works part of the exhibition What goes around comes to art, organized by London Trade Art at Herrick Gallery, London, in November 2018. The artist based his work on the same considerations and, more specifically, on the idea of perceptive alteration of the landscape, which, being put out-of-focus, loses its form, resulting in a complete fusion of lines and contours being able to bring the fruition to a higher dimension. 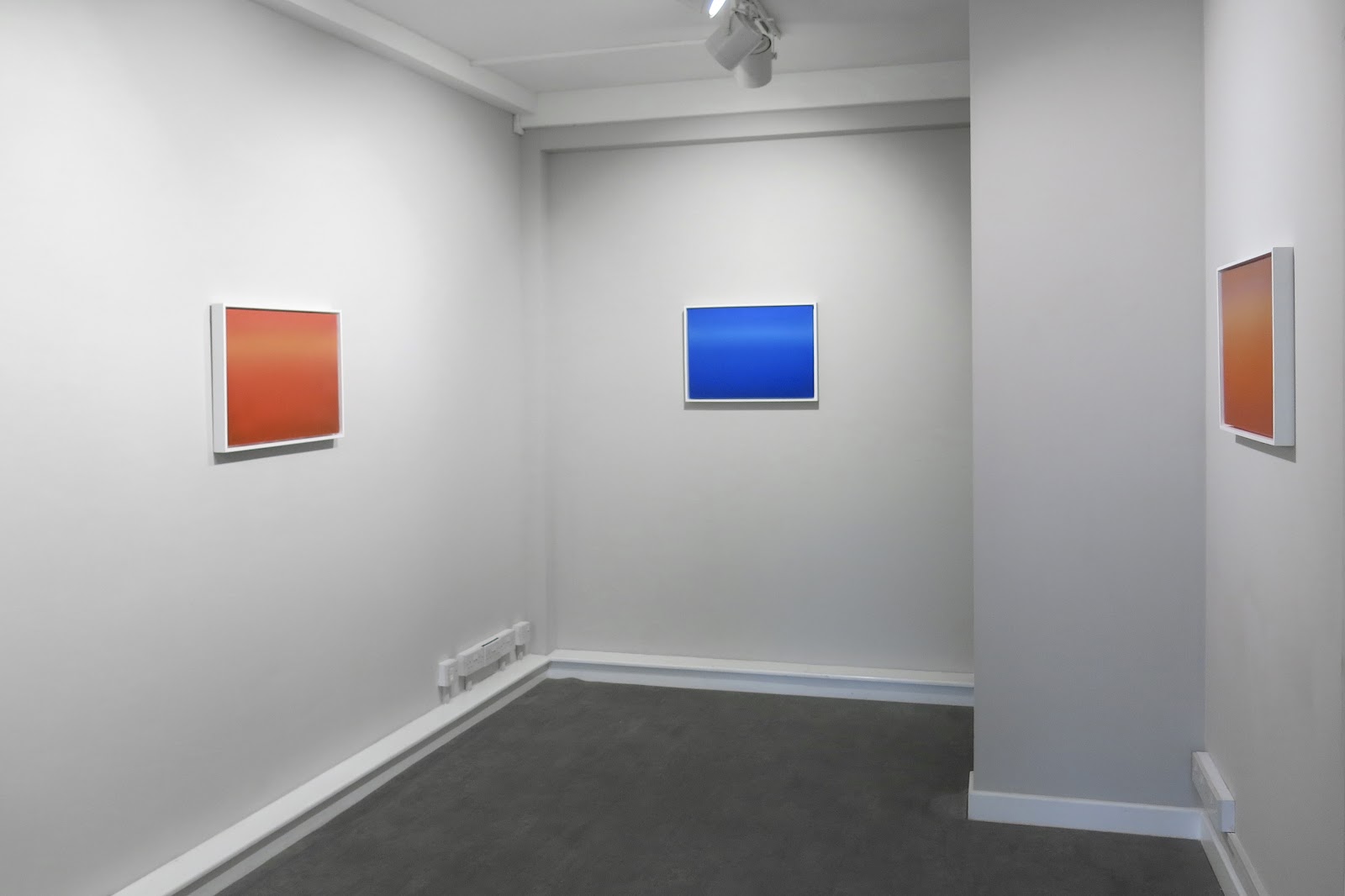 What goes around comes to art, installation view

The colour plays a remarkable role in the pictorial restitution of the artist’s research: as the image’s form is represented as observed by the most evolved technology, at the same time the colour is saturated and emphasized in order to make it as similar as possible to the way a mechanical eye would observe it. This aspect should be linked to the history of the modalities of capturing the reality, which, originating from black and white, then, thanks to technology, comes to an almost unnatural emphasis on colour: in the artist’s view “in a few years we will observe the reality like this: the colour will not be perceived as faded anymore. It is interesting to notice how a photography’s features strictly depend on the era it has been produced. It represents a consequence of the devices able to capture the image at the time: it is not the real image, but just the device’s eye. My interest lies in understanding how the reality will be observed and perceived in 100/200 years, maybe less”.

The fil rouge connecting Francesco Irnem’s work is in fact the desire of understanding the human need to adapt to the surrounding space and environment, and the anthropological vertigo felt by the human being while observing the reality, both natural and artificial. The artist’s strength lies in making possible to reflect on contemporary dynamics, technology and future, by using the most traditional and immanent media, represented by painting. In this sense, the pictorial practice is seen able to resist the passing of time, having furthermore the responsibility of representing the society from an era to the following one.

The history of art strongly supports Francesco Irnem’s solidity thanks to references to great artists as for example Caravaggio, from whom, according to the artist, originates “the feeling that painting is not exclusively visual, being instead something able to occupy the space so much to become even invadent. It is like an installation involving our senses in a much wider way”. And it is possible to state that these words are also able to synthesize the fruition experience of Francesco Irnem’s work, which is immersive for the senses, representing at the same time food for thought on today’s, and tomorrow’s, perceptive dynamics. 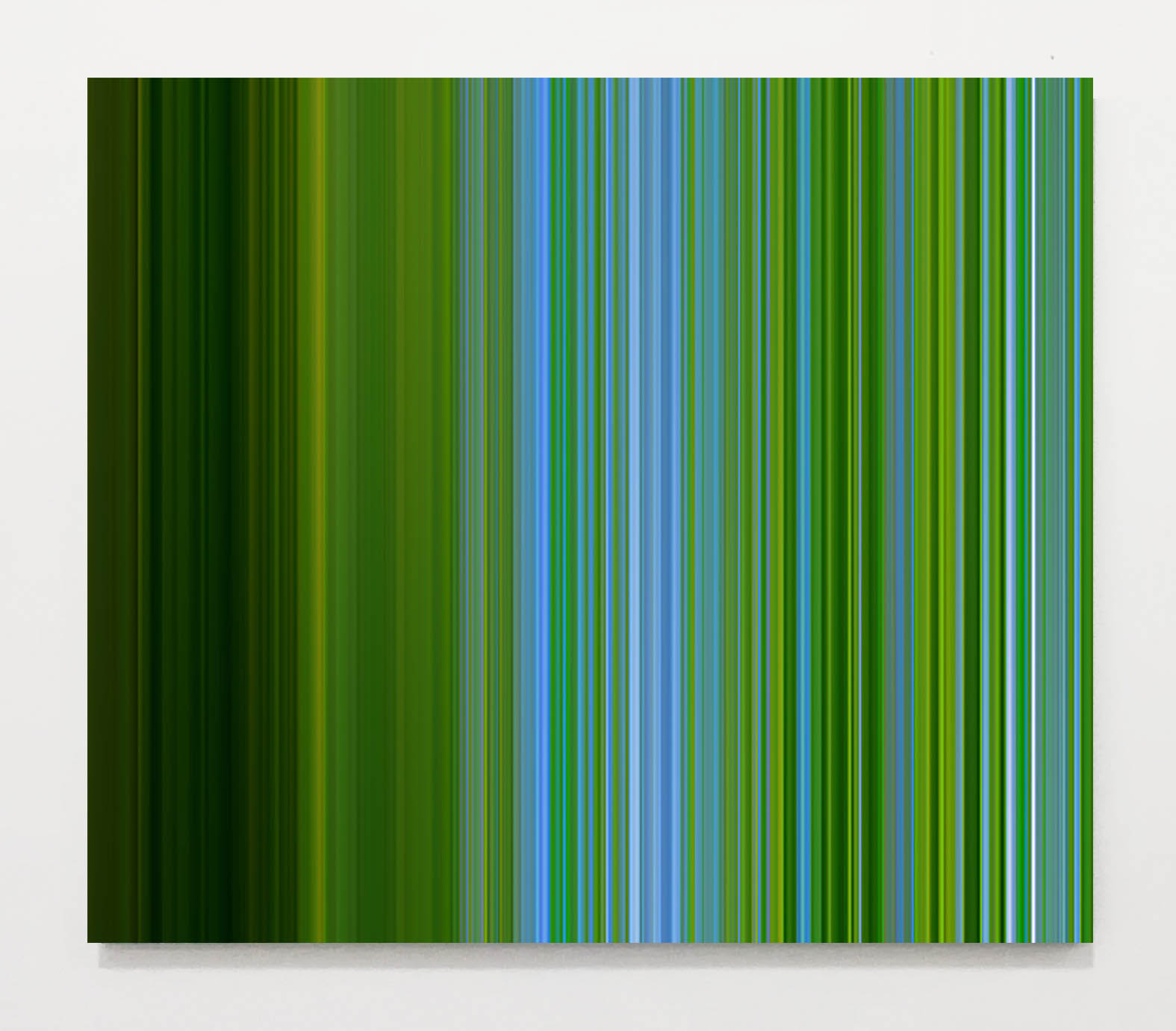 #SlimeSeries: An Exhibition by Gabriella Anouk

In partnership with London Trade Art, contemporary artist Gabriella Anouk will be exclusively presenting works from her #SlimeSeries, purchasable as NFTs and physical art prints, in London on Tuesday, January 25th.

Deloitte recently released their 2021 edition of the Art & Finance Report, summarising and analysing how the art world is currently navigating through numerous global challenges. In this article, we break down the report’s main points.

Read more
ALIGHIERO BOETTI: 'MADE BY AFGHANS, FOR AFGHANS'

In this article, we dive into Boetti’s close ties with Afghanistan, based on his heartfelt, handwritten dedication to the country, and more specifically, to the Afghan weavers he worked with, on the back of our most recent acquisition: ‘Made by Afghans, for Afghans’.

Read more
Gabriella Anouk and LTArt at the HFC Gala 2021

London Trade Art is proud to announce its collaboration with hyperrealism artist Gabriella Anouk in support of the 2021 Help for Children Gala, which celebrates 15 years of HFC’s efforts to fight child abuse in the UK.