The piece, signed by the artist and registered at the official Archive (n. 9752), is made even more valuable by the tribute to the people of Afghanistan with the words, 'to Afghans, by Afghans', written by Boetti on the back of the artwork. Indeed, Boetti took inspiration for his research from Afghan embroiderers, directly involving them in the art-making process.

It is also the first time that this 1989 piece enters the art market, where it is so rare to find a piece of the same level of quality and size available for purchase. 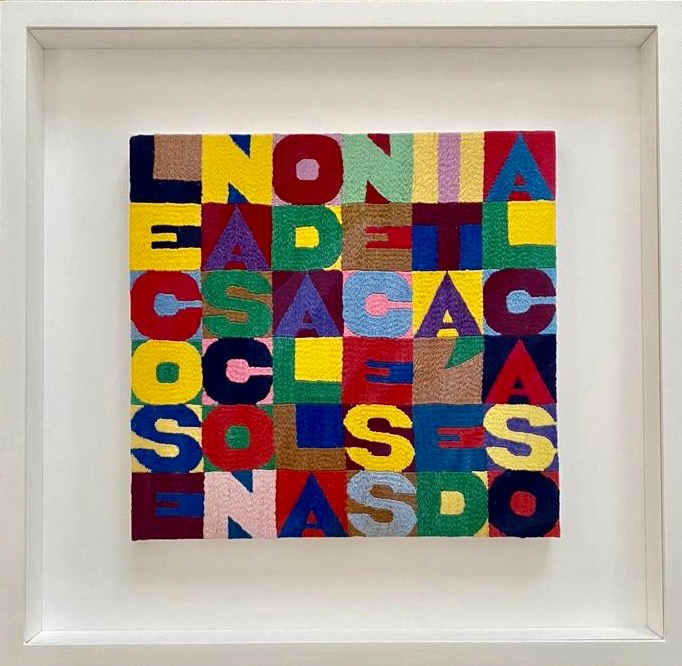 Born in Turin, Alighiero Boetti was an Italian conceptual artist, considered to be a member of the Arte Povera movement. He is best known for his series of embroidered maps of the world, 'Mappa,', created between 1971 and 1994. Another one of his famous types of works consist of coloured letters embroidered in grids ('arazzi') on canvas. Upon closer inspection, the letters read as short phrases in Italian, often truisms or wordplays.

Alighiero Boetti is a Blue-Chip artist and his work has always played a primary role in the art market, especially over the last 20 years. In fact, there has been a boom in Boetti's market since 2000. He has very much become a global figure with an international market, and, while the record price for a Boetti was £144,000 at the start of the new millennium, it reached £4.6 million in May 2021. More specifically, according to Artprice, $100 invested in a work by Alighiero BOETTI in 2000 would be worth an average of $1,528 (+ 1428%) in September 2021. Confirming to be a safe haven asset, Boetti’s market has also boomed during the pandemic. Its value has grown by 12.8% in 2020 and its ranking in the art market achieved n. 99, while it was n. 328 in 2000. Geographically, the first market for Boetti is represented by the UK (61.3% of the geographic distribution over the past 10 years).