From a formal point of view, Lapo Simeoni's contemporary artwork is divided into three parts: the bottom is an 1800 lithography representing a young bourgeois holding a dog in her arms. The intermediate level is composed of wooden sculptural hands keeping a Buddhist Mudra. The fingers hold glass optical lenses of various sizes.

The entire piece shows an exceptional dynamism: the image melds with the sculptural hands through the lens.

The lenses show the same sculpture from different perspectives, which represents the complexity of each point of view.

The variety of observation is close to the holistic philosophy, according to which "the properties of a system cannot be explained exclusively through its single components because the functional sum of the parts is always greater than the sum of the performances of each of the parts".

The idea that everything can be perceived and that we all need to take multiple points of view into consideration is part of Eastern philosophy, which has been combined with Western materiality (lithography, hands, lens) in this artwork.

The intersection between East and West melts in this piece, creating a metaphoric link between the different cultures. 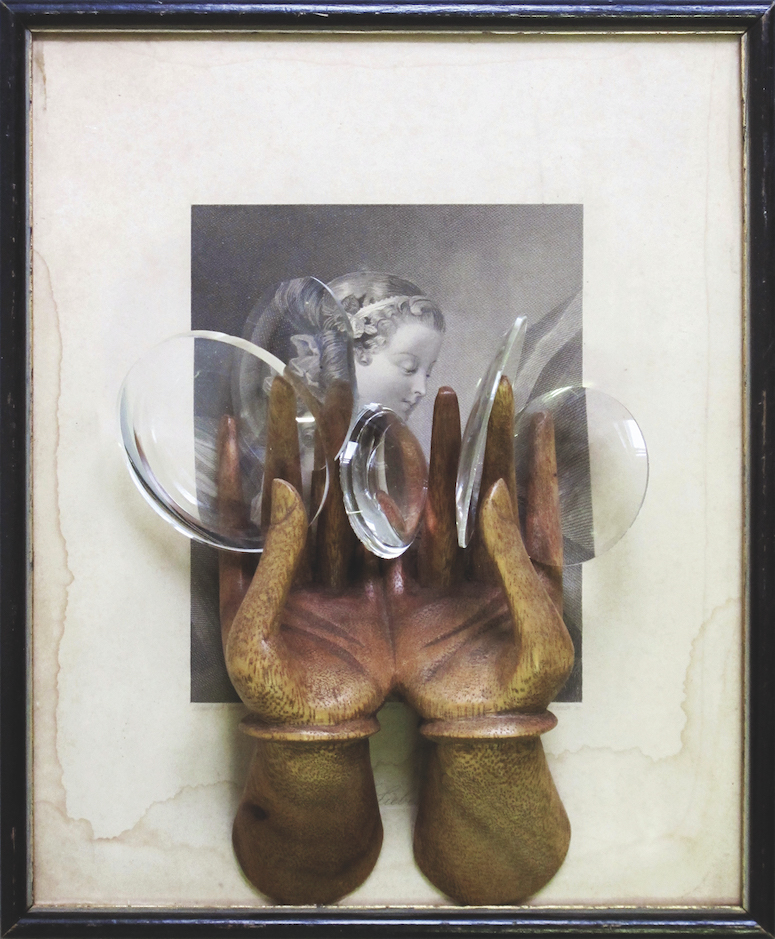 Lapo Simeoni (1979) is a graduate of Central Saint Martins College of Art and Design in London. He currently lives and works in Berlin.

Through the use of recycled materials, furniture, collages, paintings, photography, books and objects, he reconstructs narratives around the relationship between man and consumerism, thanks to an extensive process of transforming each material and changing its original function. The artist works with images of the past and present, including photographs of monuments, in addition to logos and symbols from old magazines, contemporary advertising and ancient artefacts or forgotten household objects. Simeoni also alters images and objects assembling and deconstructing them, in order to develop a new vision of time and social transformation entirely ascribable to the contemporary.